Every now and then a memory surfaces.  Growing up, Mom would let us loose in the kitchen from time to time.

We used to make Chef Boy-Ar-Dee pizza kits, usually on Friday nights.  These kits came in a box containing a bag of crust mix, a small can of sauce, and an even smaller can of grated Parmesan cheese.

To make the crust, you mixed warm water into the crust mix and let it sit in the bowl several minutes.  There was yeast in the mix and so it needed to sit and rise.  I loved the smell of the dough rising!  When the time was up, we'd grease up our hands with Crisco shortening and stretch the dough over the pizza pan, then pour on the sauce and sprinkle the cheese.  Bake it in the oven, cut it up, and EAT!  Those were the simplest, least complicated pizzas ever, and were they ever CHEAP!

We used a Pyrex mixing bowl (the smallest one) to mix the dough for the crust.

Another favorite kitchen creation was chocolate chip cookies.  Good old Nestle Toll House cookies (but no nuts - yuck!).  Out came another Pyrex bowl - the largest one.  Mixing the cookie dough took real effort - we should have had one arm more developed than the other just from mixing.  I'm lazy now - thank heaven for my stand mixer!

I loved those Pyrex mixing bowls.  We used them for everything.  If it needed mixing, out came the Pyrex bowls.  Over the years, they disappeared one at a time - breakage took its toll.

I've had different mixing bowls over the years, and never found ones I really liked.  About a year and a half ago, one of my friends and I were heading home from southern Indiana and decided to stop at a huge flea market.  Let's go browse!  In one of the first few booths, there they were - vintage Pyrex mixing bowls!

Oh, how I coveted those bowls!  But they were expensive - $75 for a complete set. Oh my.  I showed great restraint, however, and deferred the decision.  Since then, I picked up a couple of the largest bowls and one of the second-largest.  The two smaller sizes are difficult to find because they were generally used the most, so suffered more breakage.

I looked online; I looked in antique stores.  What I found were bowls that had been well used - they weren't glossy anymore, and even worse, places where the color had worn off.  I despaired of completing my set.  Finally, I walked into my favorite LOCAL antique mall, and there they were - pristine!   Amazing.

I gave the extra of the largest bowls to That Girl so she can make "puppy chow" (A.K.A. Chex Muddy Buddies) and I have the rest.  I LOVE using those bowls.  They make me happy.

I guess I'm trying to relive my childhood.

Not a bad thing.

With the coronavirus crisis, we're staying home like everyone else, except for periodic foraging trips to the grocery.  I cook - a LOT.  I clean.  I actually bleach my kitchen counters and sink, something I never did before.  I'm taking a short-term online American history course from Hillsdale College.  I'm trying to learn Tai Chi on YouTube.  I make to-do lists and try to check things off.  I scroll through FaceBook.  I'm working on painting watercolors.  I'm knitting hats for the 2021 NBA All-Stars volunteers.  I'm crocheting chemo caps.  Not all at once, of course!

There are daily visits from the likes of Clark Gable, Cary Grant, Jimmy Stewart, Humphrey Bogart, Katharine Hepburn, Joan Blondell, Lauren Bacall, Lionel Barrymore, Clara Bow, Harold Lloyd, Buster Keaton, Ruby Keeler, and a zillion others.  I especially like the movies on Silent Sundays - I"m glad we can DVR those - they start at midnight!  Not that I wouldn't stay up all night to watch them, but...!  Not a good idea, when I'm doing home health care right now, and medicines need to be doled out at specific times.

There's a boatload of MeTV to watch, too - Leave It to Beaver, The Flintstones (!), Green Acres, Hogan's Heroes, The Andy Griffith Show.  And we've officially turned into Old People - after dinner, we watch Wheel of Fortune and Jeopardy!

Oh my.  We're turning into our parents.  I guess someone has to. 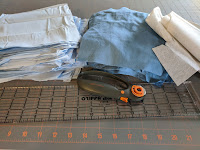 On top of all this, because of CDC recommendations, I've started making face masks for us.  I cut up material yesterday, and today I started assembly.  There's a nice pile to work on, as you can see.

So, plenty to DO.  I had long lists of things I wanted to do after retiring, but now my lists are somewhat different.

IT'S ONLY TEMPORARY.
Posted by Ruth at Monday, April 06, 2020 No comments: Links to this post

My sister and I went to lunch with one of our cousins a while back, and saw Lime Perfection Salad listed on the menu as one of the choices of side items.  Well, it wasn't what I expected; it was lime Jell-O with pineapple in it, and a dab of mayonnaise on the side.  There were a few things missing from it, as far as I was concerned.

This is another vintage recipe from my mom's recipe card file.  She got it from one of my great aunts, Auntie Ruth.  She married my dad's mother's brother, Raymond, and they treated Dad like their own son, so we visited them quite a bit.  When we ate dinner with them, more often than not, they'd have Lime Perfection Salad, and that's where I first had it.

In their younger days, Auntie Ruth and Uncle Raymond had run a tea room in Boston, and this is something they served there.  If I had known what the ingredients were ahead of time, I probably would have refused to eat it, but it is delicious!  I used to make it and take it to work for lunch.

Just for fun, I Googled "lime perfection salad" and oh, the hits!  But there was only one that was even close to what I'm used to.  Most had lime Jell-O, pineapple, and CABBAGE as ingredients.  Uh, NO.  One was almost the same, except for the addition of sweetened condensed milk.  I think that would be too sweet.  A couple had cream cheese in them.  Hmmmm...

Anyway, here's the version I'M used to, and it's pretty good!

Dissolve the Jell-O in the boiling water.  Stir in the remaining ingredients.  Pour into a gelatin mold, or divide among 8 small molds or bowls.  Refrigerate until well set.

NOTE:  It's not necessary to stir after first mixing in the cottage cheese, pineapple, and mayonnaise.  The mixture doesn't tend to separate like most gelatin molds do.
Posted by Ruth at Saturday, April 04, 2020 No comments: Links to this post

Zatarain's used to make a Creole rice mix, but after McCormick bought them out, I guess they decided that particular product wasn't necessary anymore.  I actually bought a case of it on Amazon when I couldn't find it in the stores.  When that was gone, I played around, trying to figure out a replacement.  Here's what I eventually came up with, and it's not bad at all! 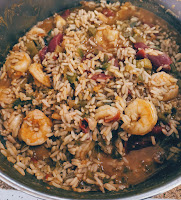 Shrimp Creole from the Pantry

Follow by email directly below, and new posts will arrive automatically in your inbox. Just like magic!

More About Me than You Probably Want to Know

Some of the links in these posts may be "affiliate links." This means if you click on the link and purchase the item, I may receive an affiliate commission, at no additional cost to you. I am disclosing this in accordance with the Federal Trade Commission's 16 CFR 255, "Guides Concerning the Use of Endorsements and Testimonials in Advertising."